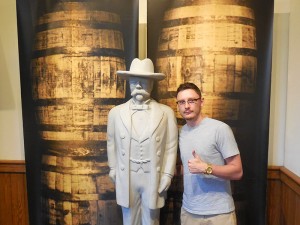 My travelling companion and I were passing through Tennessee as part of our road trip of the US when, out of nowhere, an idea popped into my head. ‘Isn’t Jack Daniel’s made in Tennessee? Why don’t we call in and do a tour?’ It was thus decided that, at the very last moment, we would alter our course and head to the Jack Daniel’s Distillery. It was a close shave, but we just about made it in time for the day’s final tour. Phew!

Once you arrive you can’t escape the fact you’re at the very epicentre of Jack Daniel’s production – literally everything is branded, from plant pots to vats. The grounds of the visitors’ centre are extremely neat and tidy and are a nice place to hang around should you have to wait a while for the next tour. There are two options available for visitors: a free tour or an enhanced tour which costs roughly $10 and enables you to sample three different whiskey variants at the end of the tour. Each of the guided walks around the distillery last around an hour and forty minutes and are, considering you can do them free of charge, extremely comprehensive and informative. 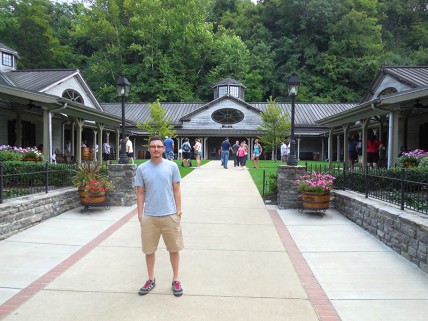 Outside the visitors’ centre 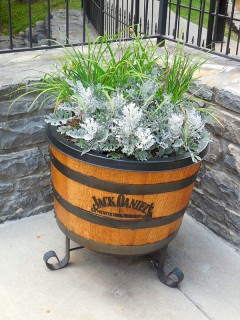 One of the first things you will learn from your guide is this unusual fact: Moore County, where the distillery is based, is dry – meaning no alcohol can legally be sold there – and has been since Prohibition times! It’s crazy to think that one of the world’s most noticeable alcoholic brands comes from such a place, isn’t it? That said, the distillery does make use of certain loopholes and has struck up certain bargains with the local lawmakers to enable some alcohol to be consumed and traded on the premises. For example, when you pay for the sampler tour you are actually paying for the longer tour and the whiskey is given to you at the end for free; or, if you buy a bottle of whiskey from the gift shop, you are purchasing the bottle and the whiskey is handed over  free of charge. Clever… In fact, the gift shop is the only place in Moore County that can legally ‘sell’ alcohol.

After posing for a few photographs with Jack himself (well, statues at least) you are off on your way around the distillery proper. We arrived on the afternoon of a searing summer’s day and the guide was kind enough to huddle his group beneath welcome shade as he proceeded to explain the inner workings of the distillery. Beware of darkened corners, however, as you’re likely not to be the only creature looking for shade from the beating sun – as we were being told about the charcoal used to produce Jack Daniel’s a snake slithered out of a bucket which was stood right next to me! To say I jumped a mile would be an understatement! 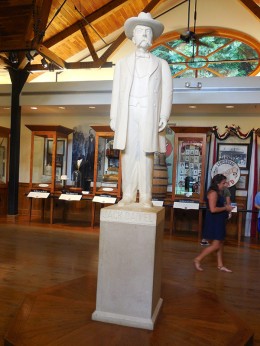 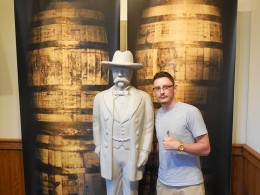 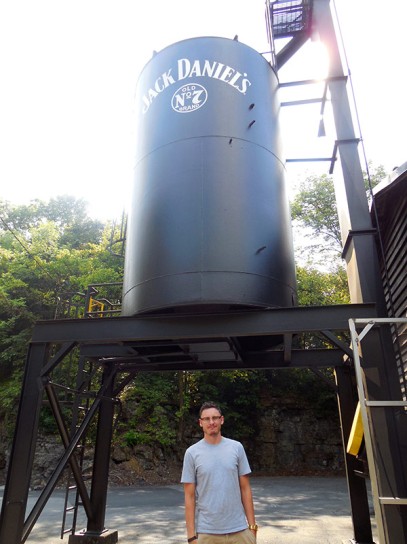 You’ll be taken through numerous working buildings, shown a range of historic photographs and have Jack’s legacy and the history of his company explained to you in great detail. You’ll even get to see the infamous safe which claimed Jack’s life – he wasn’t crushed in cartoon fashion, but died of gangrene after kicking the hulking item in a fit of rage. Poor Jack was a diminutive fellow, just over five feet tall, so perhaps his inherent anger was as a result of a Napoleon Complex? We’ll never know, really, as the man (just like the Old No. 7 conundrum surrounding his whiskey) is cloaked in mystery – even the birthday the employees here celebrate every year is an imagined one.

Next you will be shown the fresh water spring which has been used to create every bottle of Jack ever made – there’s one last chance to snap a photo with Jack if you missed the opportunity earlier! Just round the next corner stands the barrel room where you can observe the whiskey dripping through the charcoal you were shown earlier and can waft the lids to fill the room with intensely strong whiskey scents – no photos allowed here, however, as one flash can apparently ignite the highly combustible fumes in the air! It sounds far-fetched but, if you bear witness to the overpowering whiff in this enclosed space, you can just about start to believe it! 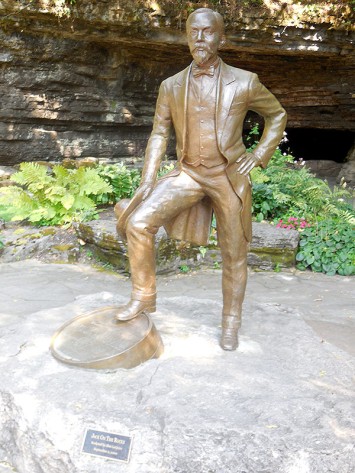 Jack on the Rocks – clever! 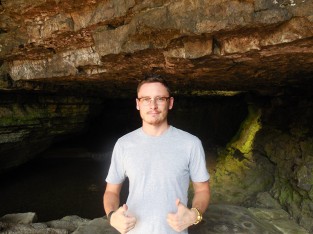 Me and the fabled spring 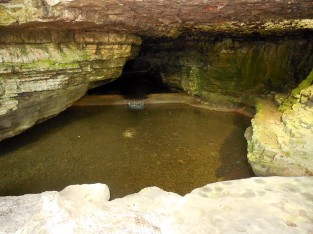 Every bottle of JD ever came from here

As you leave this area, the guide will highlight the fact that many of the buildings and trees have an unusual black covering on them – a fact you’d likely miss unless it was pointed out to you. Apparently, this is a direct effect of whiskey production. Some minuscule bacterium in the atmosphere thrives on the fumes thrown out by the production process and they attach to the walls, gorge themselves and turn everything black. 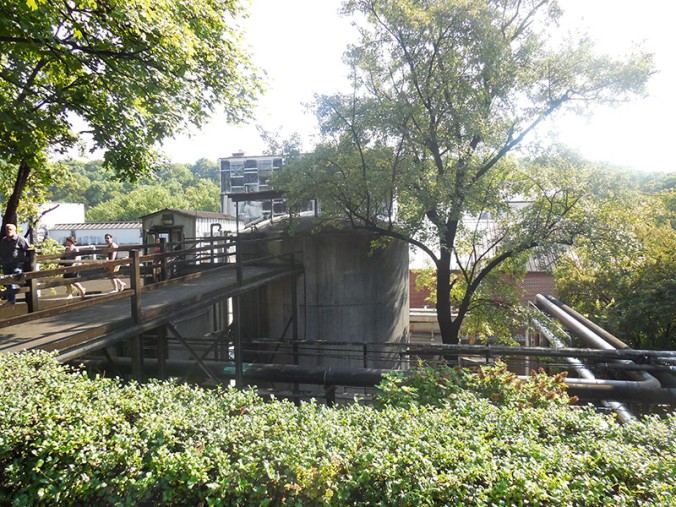 As you near the end of your tour you will be taken to a room with some artistic constructions made of backlit Single Barrel whiskey bottles and covered in commemorative plaques. These plaques can be earned by splashing the cash and purchasing an entire barrel of whiskey in one go. The cost of these barrels? A cool $10,000! As a result, most of the plaques are held by companies who buy big for employee festivities or celebrities and multi-millionaire tycoons. One can but dream, I suppose. The final sight before your taster session is a large shed tinged with the now familiar scent of whiskey where the pregnant oak barrels are left to mature until they are aged enough to be bottled and sold around the world. 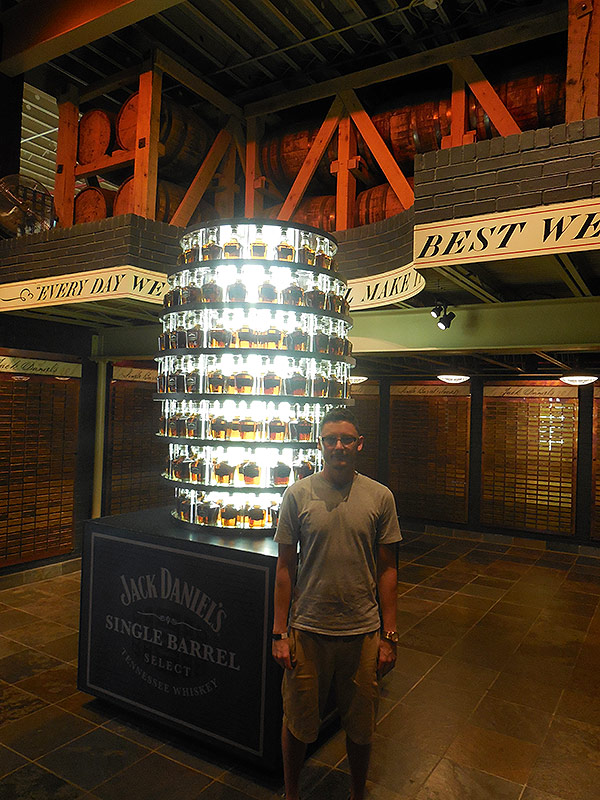 At this point the tour group will split as people who embarked on the free offering and those who paid for the sampler session go their separate ways. Enhanced tour groupers will be given three small thimbles of whiskey: one filled with regular old Jack Daniel’s; one with the more refined Gentleman Jack; and one with top-end Single Barrel blend. Your guide will explain the difference between the three variants and kindly remind you that Jack Daniel’s is a sipping whiskey and shouldn’t be thrown down the hatch in one go. Perhaps I am a man of cheap tastes, but I must admit to preferring regular Jack the best!

With that you say your farewells to your tour guide, grease his palm if you feel he’s shown you around well enough (ours did so I tipped him accordingly) and led to the gift shop. Here you can purchase (for quite hefty and seemingly inflated prices) a range of different whiskeys and JD merchandise. You can even pick up a personalised bottle engraved with your own name but this service doesn’t come cheap! Lemonade and other soft drinks are also provided free of charge to help refresh you after your long and arduous trek of discovery – a nice touch, I feel. 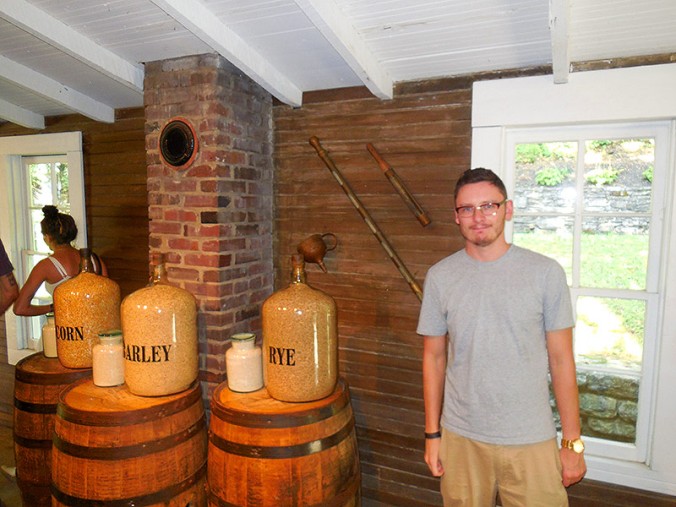 When you leave you can head over a picturesque bridge to the tiny town of Lynchburg, population 350 or so. Its historic town square houses a 100-year-old courthouse and a myriad of souvenir shops specialising in Jack Daniel’s branded memorabilia from t-shirts, caps, JD tumblers and even tables and ashtrays made out of discarded barrels once used to age the whiskey. Swept up in my visit, I picked up a quintessential Jack Daniel’s t-shirt only in grey. As already mentioned, the county the distillery sits within is dry, so don’t expect to find any of these stores selling bottles of grog for you to take away!

If you find yourself hungry there are a few restaurants to choose from in Lynchburg. We plumped for Barrelhouse BBQ, which is tucked away down a slight incline at one corner of the square. The interior is basic yet homely, all of the seats and tables are ingeniously fashioned out of old barrel parts and the staff are warm and welcoming in the typical Southern US style. The talkative lady behind the counter recommended the pulled pork sandwich so my companion and I ordered one each. Service was quick and the food was delicious and reasonably priced – we went for the large sandwich which cost us a measly $5.99. 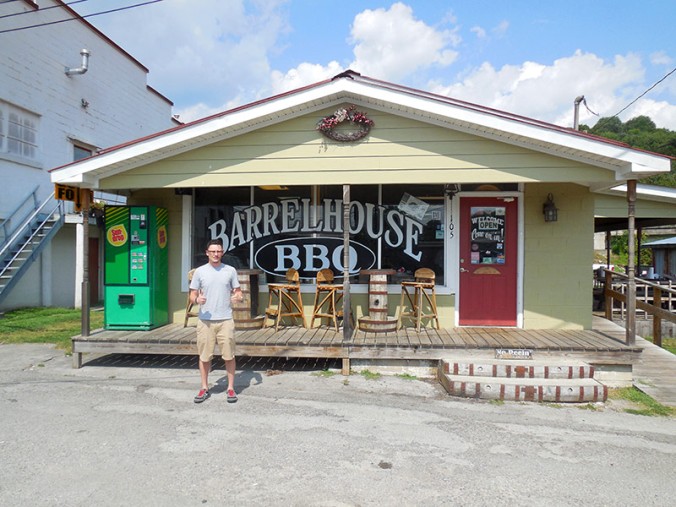 Overall, if you’re passing through Tennessee and have a taste for or interest in Jack Daniel’s whiskey, then a trip to Lynchburg’s quiet and friendly backwater is highly recommended. The quaint town square, the Southern hospitality and humour and the extensive and interesting tour will definitely make your visit worth its while.

WHAT ARE YOU LOOKING FOR?